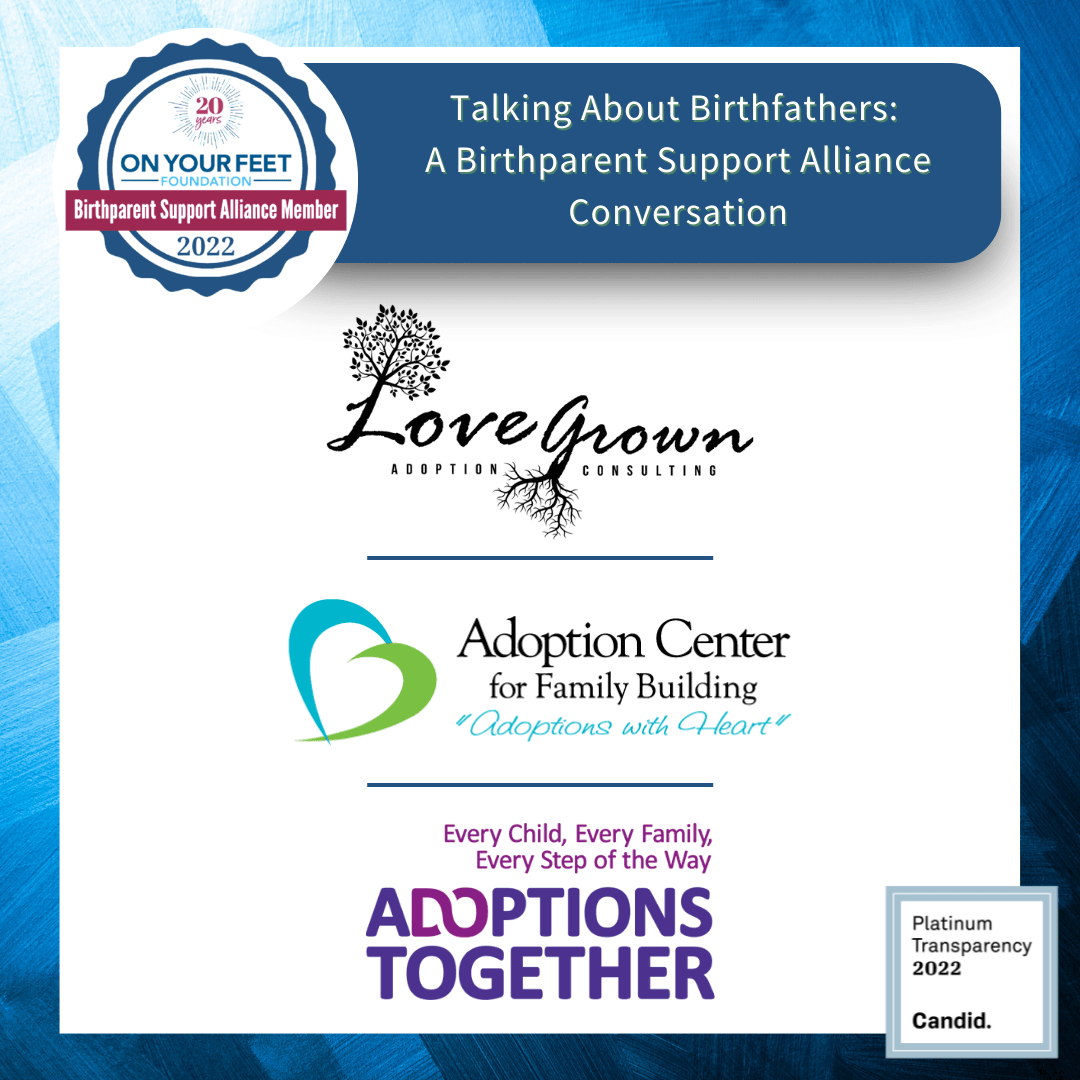 Something many people don’t know about On Your Feet Foundation is that we do not just serve birthmothers; we serve birthfathers, too, providing them a safe space and community in which to heal, including our case management services, something one of our former Case Management Staff, Julia, wrote about in this moving essay about her experience as an adoptee and having the opportunity to help and support birthfathers.

We are no strangers to having conversations aimed at examining the ethics of adoption, and we've discussed everything from rehoming adopted children to the ethics of moving expectant mothers away from their support networks, pointed out that hopeful adoptive parents advertising themselves on social media is not a good idea, and done a deep-dive into the false equivalency of adoption and abortion.

Paige Knipfer is the owner of Love Grown Adoption Consulting, and had this to say:

I feel like there's a systematic flaw in a lot of state legislation, especially those that do not require identification of the birth father or notification of the birth father. This whole [birthfather] registry thing blows my mind because I didn't know about it until I was in the adoption world, that that even existed. The idea that a man would need to know to check a registry to find out if an interaction resulted in pregnancy, I don't know who would know to do that. There are a lot of things lacking as far as identifying and notifying fathers and protecting his rights, and every state is different on identifying birthfathers. We just don't see many cases where he's even identified. We don’t know who he is, or all we know is that he filled out one form, and that’s as much information as anyone has. That’s just kind of accepted as the status quo and I feel like it shouldn't be. There are certain extenuating circumstances, I understand that. But in general, until a shift occurs, I don't think that we're ever going to see more involvement.

I also really disagree with the idea that, because the birthmother chose adoption, the birthfather is on board with that decision. They are two different people, and they may have differing ideas. But does he even know? Does he even know this child exists, that she’s making an adoption plan, or she’s decided to parent?

And then then there's a whole other layer to transracial adoption, right? So, a birth father holds the identity of that child, and if he’s not identified or involved, that's a whole other missing cultural piece for this adoptee.

There's such a stigma of people who go to therapy and then especially men who seek any type of therapy for a child that they didn't carry. It’s just as much of a loss, that they experienced. So there's a lot of stigma that goes with them seeking help, too.

Linda Fiore, Executive Director of Adoption Center for Family Building, points out the importance of acknowledging fathers in the adoption process:

Some of the feedback we've received is the fact that they're being acknowledged at all in this process has meant a lot to them. We also received feedback from one of our expectant mothers that we were working with who told us how much it meant to her that we asked about the birth father because he had been extremely supportive. When we ask about him, we do not do it in an intrusive way. We want to get an idea of the full situation, and she said, you know, I spoke to another agency, but you're the first agency that asked about him and about us. We offered him his own birth parent counselor in case he felt he wanted someone separate from her; to have his own advocate. Sometimes birth parents are making this plan together, and they're meeting with our counselor and sometimes they're in support of the adoption, but they're no longer in a relationship. We want them to feel like they can also have an advocate in this process to talk about what their rights are.

I think about this younger couple we worked with, and they were no longer in a relationship, but he was still driving the expectant mother to doctor's appointments. She didn't have a car. And when he found out that we could offer him a gas card, you would have thought that we gave him five million dollars. Any type of financial support we offer to an expectant mother, we want to be able to offer that to birth fathers as well. They are also making a very difficult decision, and we want to make sure that they have support in place. Our adoptive families are very open, once that match happens, to support a birth father as well. I think it's important that birthfathers are also acknowledged, because birth fathers can really struggle emotionally, especially in situations where they would have wanted to parent but they are honoring the expectant mother's wishes. The care and the counseling provided to them looks a little different. I think that acknowledging that sometimes it wasn't voluntary for them, but they were in support of an expectant mother’s decision; both can be true, right?  Both positions can be held at the same time. We see birthfathers who say, I am supporting the expectant mother and making an adoption plan. However, this is really hard for me because I would have liked to possibly try parenting. That doesn't always get acknowledged.

When we talked about misconceptions, one of them is that all birth fathers are out of the scenario: that they don't care, that they'll just sign off on paperwork. One of our counselors met recently with a birth father and he said, you know, I'm not trying to be short with you. I'm just trying to be detached, which makes sense. This is really hard for me. I support her and her decision, but I just want to get through this right now. That's a powerful, powerful statement from him. We have our birth fathers we've worked with that have really appreciated that we acknowledge them in the process.

Meshan Lehmann, LCSW-C, a pregnancy social worker at Adoptions Together, added this:

I think that we need to include birth fathers whenever we can and recognize that they are grieving too. They deal with similar pressures and stigma that birth mothers do in this world, and we can be more supportive of them. Often fathers get pushed aside, or are really considered side players, and it's not fair to those who are involved and are a part of this process. I think agencies often see them as an obstacle to overcome. They don't often give them like the same respect, courtesy that they would a birthmother and I think that is something a lot of agencies continue to work on.