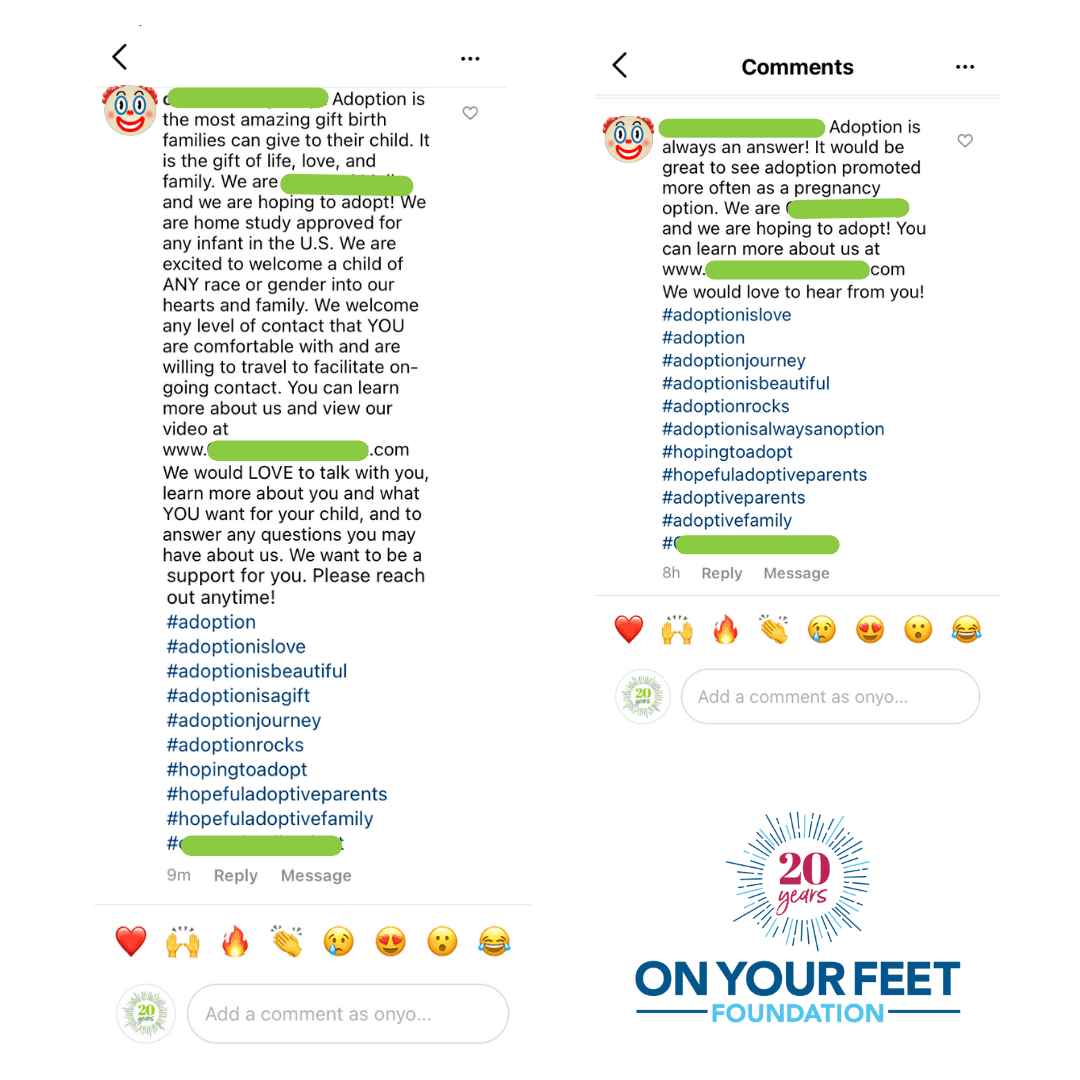 "I have never heard someone say so many wrong things, one after the other, consecutively, in a row."

When we receive comments like this on our social media posts, our typical response is to delete them, respond privately about why the comment is inappropriate, and move on. But, as part of our series on Ethics in Adoption, we are highlighting these comments because they speak to a fundamental lack of awareness about the profound, lasting impact adoption has, both on adoptees and birthparents, and completely sidesteps the responsibility of adoptive parents to support ethical practices in adoption.

Positioning adoption as a gift implies that adopted people are objects, dehumanizing them. We don’t give people to other people. It isn’t a gift to separate an infant from their mother, and the idea that adopted children didn’t already have a life and love prior to placement is an ugly - and erroneous - assumption. Infants are not blank slates: the primal wound runs deep, and all the cute hashtags in the world aren’t going to mitigate that. Trolling social media hoping to find a woman - any woman - experiencing a crisis pregnancy, and then marketing yourself to that woman, telling her that she isn’t enough for her child, that somehow what you are offering is better, is wrong on every level.

There are so many promises being made here, all of them suggesting that any expectant parent considering placing their child would somehow be an equal partner in this adoption with them. That the power to decide how often she can see her baby resides with her, and that they want to honor the future she wants for her child. But the truth is, that’s all empty marketing. It’s also part of the reason why many expectant women believe that an open adoption agreement is legally binding, when the reality is, nothing the adoptive parents agree to is legally enforceable, and the majority of open adoption agreements are violated by adoptive parents by the time their child is five years old, regardless of what was promised upfront.

And those promises? The ones about flying across the country to facilitate ongoing contact with a birthparent? That’s just not a manageable model. Realistically, nobody is going to be able to regularly get on a plane with their child and fly across the country to facilitate a connection with their child’s birth family. Flights and hotels add up over eighteen years. Work commitments, kid’s schedules - sports, and music lessons, and school events - can make travel difficult. Life gets in the way. When hopeful adoptive parents make promises like this that they will not be able to keep, they are setting themselves up for failure at the expense of their child’s birthparents, and that is not okay.

As for the ‘adoption is always an answer’ comment? Nothing in either of these comments suggests an understanding of how hard a road it is to be either an adoptee or a birthparent. Researchers report that birthmothers experience long-lasting ambiguous grief, and that the emotional effect of relinquishment includes confusion, sadness, anger, and guilt. “A birth mother may feel she made the right decision regarding placement and yet still experience ongoing feelings of loss and grief even years later,” according to Elissa Madden, Ph.D., associate professor of social work at Baylor and lead author of the study, "The Relationship Between Time and Birth Mother Satisfaction with Relinquishment."

In a review of research regarding the birthmother experience, researchers Mary O’Leary Wiley and Amanda L. Baden found that in therapy, birthmothers carry feelings of continuing shame and depression, and define themselves as, “unacceptable and unlovable.” And those negative emotions don’t fade with time. Their research goes on to suggest that as birthmothers age, they become more regretful of their decision, stating, "it may be that the distance afforded by time, along with the internal resources and perspective that often comes with age, may have provided an opportunity for birth mothers to look back and reflect on what could have been.”

Finally, when we are posting information directly aimed at adoptive parents on social media, we use the hashtags #hopefuladoptiveparents and #potentialadoptiveparents because we want to make sure that adoptive parents know about the kind of support and care all birthparents require and deserve, post-placement, and to remind them that they share in the obligation to make sure that adoption is an ethical practice. These tags are how we reach our audience for Activism in Adoption, our adoption education speaker series, which brings people from all points in the adoption constellation together to learn from our speakers, and to remind adoptive parents to consider joining our Circle of Good program, which makes sure that post-placement care is available for all birthparents, regardless of when they placed.

To post comments like these on posts designed to encourage adoptive parents to remain committed to ethical adoption practices is beyond tone-deaf; it’s traumatizing to the population we serve and the community around us.

For the people who leave comments like these, we say this: educate yourselves.  Join us at an Activism in Adoption session. Sit in that (virtual) space and listen to what our birthparent and adoptee speakers have to say about how adoption impacts their life every day. Seek out resources that address adoption trauma, and learn how adoption impacts the other members of your triad, not just in the early years, but for the rest of their lives. And think long and hard about where you post your advertising, or troll for women in crisis. Don’t spam accounts you aren’t familiar with and assume that your message is welcome with either them or the audience they serve. Ask yourself why you thought you could use On Your Feet Foundation’s community as a resource to find a baby for you.  We are not your billboard.

Someday, you are going to have to tell your child the circumstances surrounding their adoption. Are you going to be able to tell them that you did everything you could to make sure their adoption was ethical? That you made sure that their birth mother had access to the resources she needed to heal? - Hope Baker