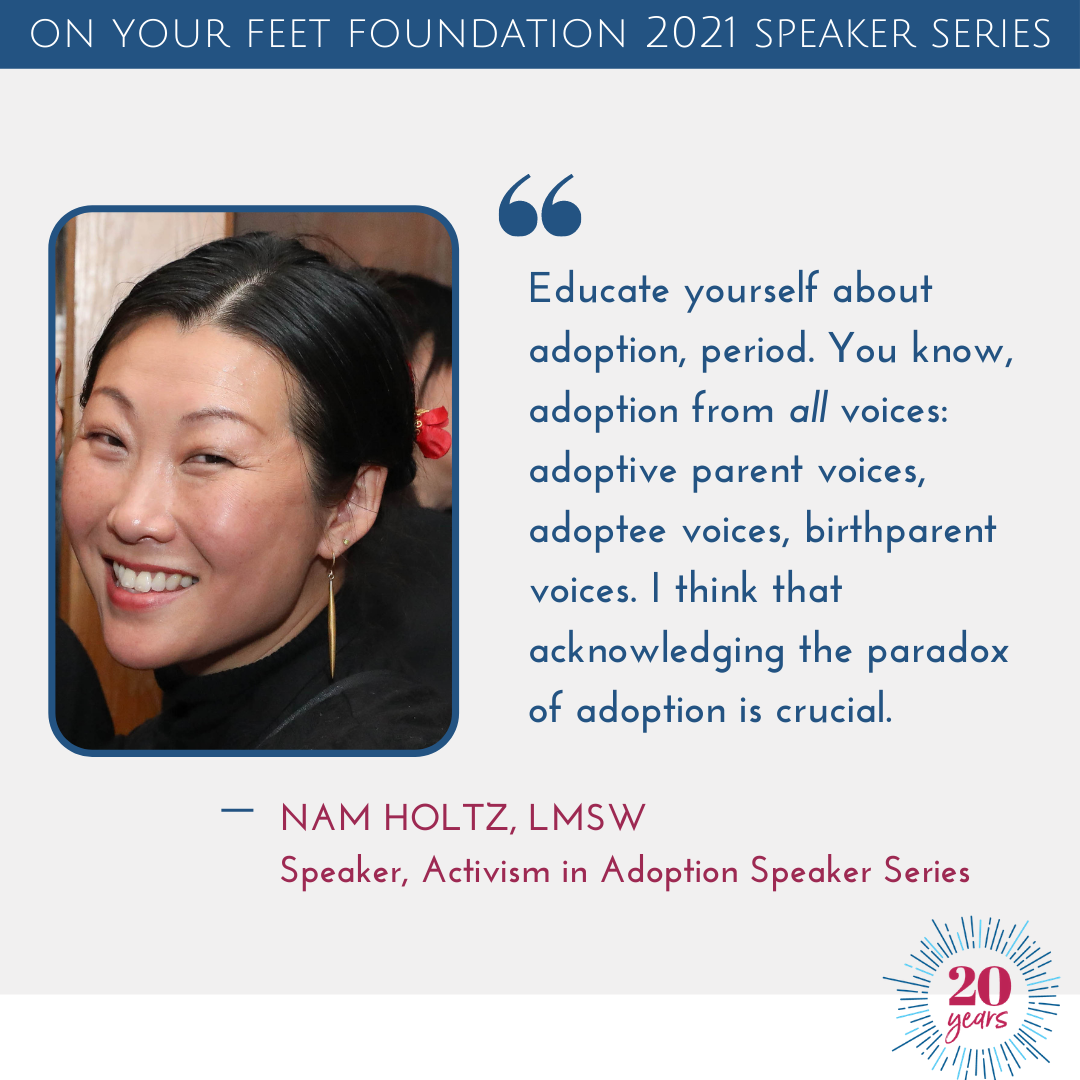 Last week, we had the opportunity to talk to Korean adult adoptee, documentary filmmaker, and LMSW Nam Holtz about her award-winning film, "Found in Korea," documenting her return to Korea to search for her family and roots, and which was created to serve as a catalyst for conversations about adoption. This week, we have Part 2 of that interview, where we talk about how adoptive parents can best support a child adopted transracially and/or transnationally.

So what can parents do, to keep that door open for these conversations?

I think continuing to learn about the culture, and food, and language and music and all that stuff is only going to be helpful in holding up the child's identity. But I also think that, again, every child is going to be different, with how much they want to engage in that, and doing all this alongside professional help is probably a good idea, because it might bring up some stuff. I think it's a good thing that international adoption now has the requirement that [adoptive] parents to go to the country and pick up their kids. It didn't used to be that way. I think that's a good thing, as a rule, because there's no avoiding the parents’ experience of that culture. And then, also, they have an idea, they have a clue about what they are getting themselves into, in terms of going back.

What else can adoptive parents do to make sure they are supporting their kids?

I think parents should learn the language. If they can, that’s my number one recommendation. Even if you take a year of classes and all you know are some basic things, that’s going to connect you to your child’s culture. It's going to make one level of the trauma, coming from another language to here is going to be one notch down. Even if it's just phrases and you understand only a little bit, even making that effort? I recommend that.

And educate yourself on how to talk about race. That would be my other major recommendation, because culture and race are different. They're two different things. And so being able to talk about culture and have these role models and available, that's great, and necessary. But, being able to talk about race is a different set of understanding and skills, and a lot of white people just haven't done race work because they haven't needed to. So, I would say, get some support about how to talk about race and how to feel comfortable talking about race so you are regulated when you have those conversations. As well, make sure you have racial representations in your life [that mirror] your child. I think that's really an important thing. You plop them in the middle of an entirely white community? Probably not the best idea. Be very cognizant of the community in which you live and strive to have that represented in your own life.

Educate yourself about adoption, period. You know, adoption from all voices: adoptive parent voices, adoptee voices, birthparent voices. I think that acknowledging the paradox of adoption is crucial. The concept of adoption trauma is another thing to be educated about. Before the adoption happens, you know, this all has to be set up beforehand, and then also in that same vein is that, because you’re bringing in someone that's going to need extra support, have those supports ready and available to you and to your child. You’re probably going to need different supports than your child. So having the community, having the professionals, having the awareness to talk to pediatricians and with certain [adoption positive] language – being adoption informed – is going to serve everybody involved, in a positive, more supportive way.

We are so grateful for Nam’s advice, and for taking the time out of her busy schedule to sit down and talk with us. Tickets are now on sale for her talk, and ticketholders will be given the opportunity to screen the film starting 10 days prior, at their convenience. This film is suitable for children, and it is an excellent catalyst for adoptive parents looking to talk about birth search, birth parents, and finding one’s roots.