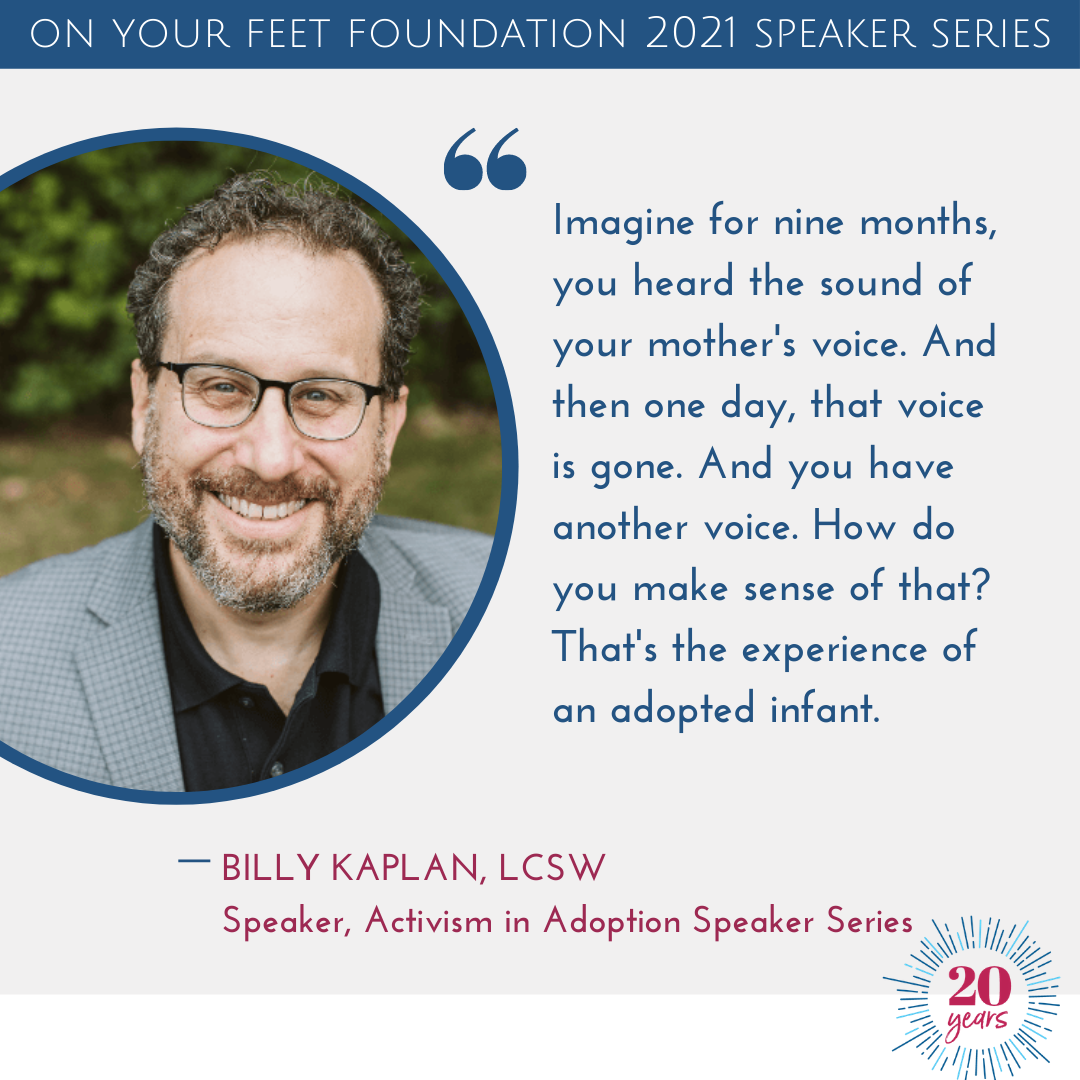 We are so excited to welcome Billy Kaplan, LCSW, as our March Activism in Adoption speaker. Billy is the President and Clinical Director at House Calls Counseling, where he works with individuals, couples and families, primarily using an attachment-focused, trauma-informed approach. We had the opportunity to sit down with him this week, to talk trauma, therapeutic parenting, and how to best navigate the uncertainty and anxiety of living and parenting through a global pandemic.

For people who maybe have never encountered these terms before, what is attachment-focused, trauma-informed parenting?

So, start from a certain beginning, which is birth. When a woman gives birth to her child, and she raises her child to adulthood, the connection is consistent all the way through. When a child is placed for adoption and becomes adopted, the adoptive parent or parents did not birth that child, and therefore don't have that nine months of connection.

Imagine for nine months, you heard the sound of your mother's voice. And then one day, that voice is gone. And you have another voice. How do you make sense of that? That's the experience of an adopted infant. And so, the rest of that child's life is different, because that first voice is gone. Then they try to make sense of it – in whatever logic infants have – but they're still trying to make sense of it because it's gone, and now something else is there, and why, and what does that mean about me and say about me and then all the implications from there, let alone for those nine months what that infant experienced, because we know now that whatever babies experienced in utero are memories that play out for kids later on in life.

How does that play out?

Depends on what the kid’s experience is. So keep in mind that I'm a therapist and so I see the kids who are struggling. For lots of kids it plays out just fine. For adoptive parents, hopefully you've learned a lot about adoption and what it means, and you start as an infant telling their adoption story, so that it's not a secret. It’s not something that we have to hide.

Some kids, when that moment of separation happens and they stopped hearing their mom's voice, they tried to understand why, and the simplest and most logical conclusion is – not that babies are so smart that they can think it, but subconsciously –they begin to think there's something wrong with me. That's why that voice isn't there anymore, because I'm bad. I'm no good. And so they end up growing up with a shame-based perspective in life. And then begin to think everyone is thinking about them as being bad and no good and things like this and it reinforces it for them, then they have lots of behavioral problems. And  that's one part of it. You know, we talk about kids who are born substance exposed, and there's lots of research and lots of talk about how the chemistry affects children's brains growing right in utero. What's not discussed as much is, what were the experiences?

How does an expectant mother's experience affect her baby?

So you're saying that infants can feel what their mother's feeling emotionally?

Well yeah. A memory is this: you've got billions of nerve cells in the brain, and two of them touch, and that’s a synapse connection. That’s a memory. [For infants] it's an implied memory, not an explicit memory. The memory is there because they had nerve cells, and they created synaptic connections. And those experiences are imprinted on the brain and they're there with you the rest of your life.

So those memories that we can't remember, they are still driving us?

Yes, although technically those memories that we can't consciously access? We do remember them, we just can't access them.  But they are still driving us.

When it comes to parenting adopted kids, or kids who have experienced trauma, what are parents getting wrong?

I would never put it that way. I really take exception to that. It’s not that you’re not doing it right. You’re doing it right for traditional parenting. Traditional parenting is where we learn from our parents, who learned from their parents, who learned from their parents, and every generation tries to pass a little less of the crap from the previous generation down. We try to do a little better than our parents did.

So that's part of what you do? You start helping parents get there?

We are really committed to helping kids heal. To help kids do better, I need to help parents to heal. Because I've also learned over the years, with some of the kids whose behaviors are from the farther end of the continuum, parents really for good reason feel very abused and hurt. So for me to help the kid to heal I have to help the parent to heal, first, because the parent has to be the strongest part of the system. And so I have to help empower the parents to give them knowledge about what to do, and for them through the ways they've been hurt by their kid, physically, emotionally, psychologically, I need to help that heal so they can get through that to be able to get to the healing place with their kid.

Come back on Monday, March 8th, for the second part of this interview, where we talk about stress, anxiety, and parenting through a global pandemic. Tickets are now available for Billy's Activism in Adoption talk on March 21st, 2020.