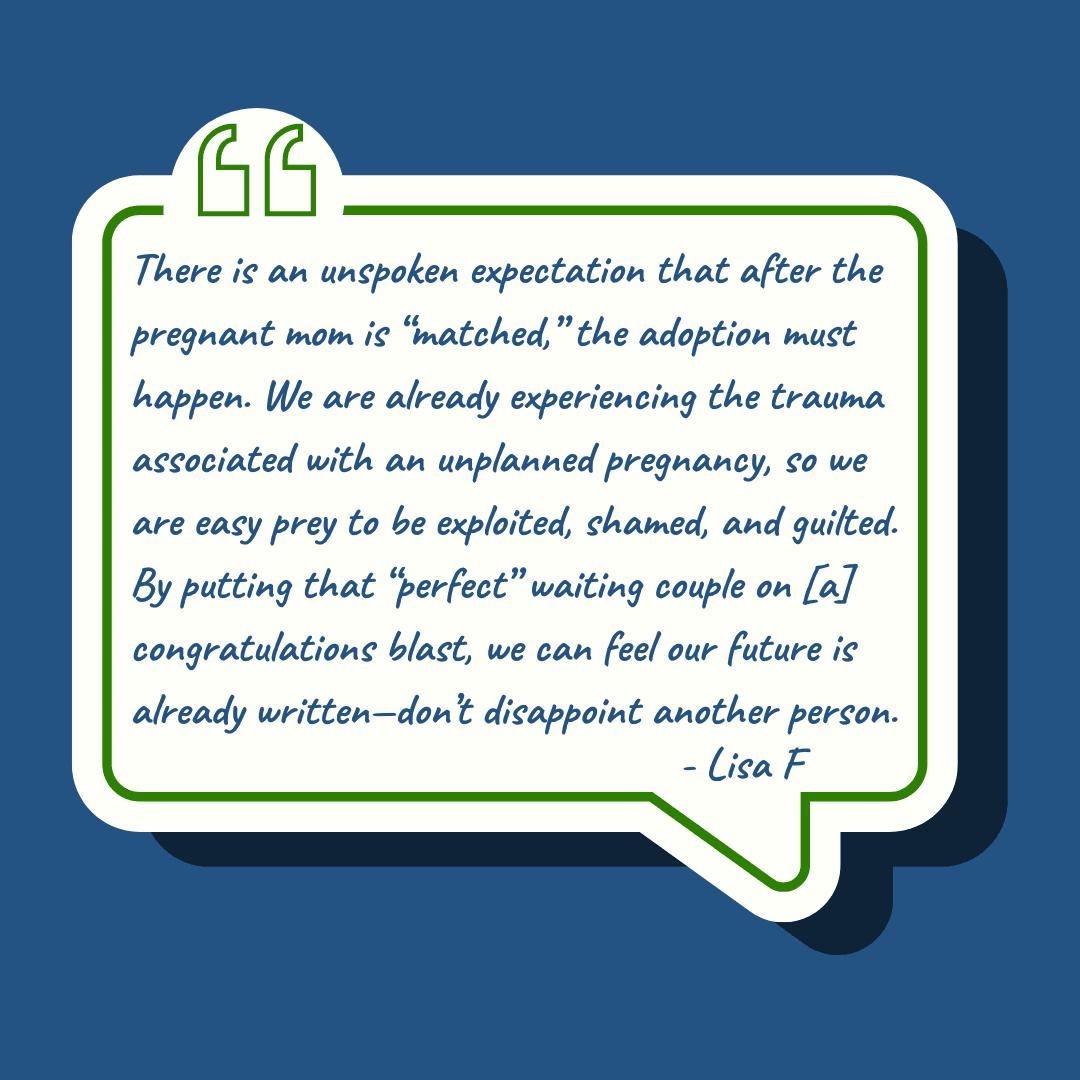 On Your Feet Foundation does not take a position on adoption. However, we do advocate for ethical adoption practices through Activism in Adoption. As long as adoption exists, we must work to ensure that every adoption is ethical and that every expectant parent and birthparent is treated with dignity and respect, which includes having full knowledge of their rights and options. Ethical adoptions help to ensure better outcomes for all members of the adoption constellation.

In order for progress to be made in adoption, we need to acknowledge some hard truths, including the history behind practices rooted in racism, bias, and coercion, as well as those practices that continue to perpetuate stigmas and reinforce trauma. In a recent interview, I was asked about the progress made in adoption over the last 50 years. I had overnight to think about the question, yet still, the best answer I could come up with was that, yes, adoption has progressed, but that progression has brought with it a new set of problems.

One of the first issues that I became aware of when I joined On Your Feet Foundation in 2015 was that of agencies posting matches on their websites and social media pages prior to a child being born and a placement being finalized. Seeing posts on social media jubilantly broadcasting, “It’s a Match!” was incredibly triggering to many of the birthparents I was getting to know and to whom I was committed to serve.

To be clear, an expectant parent’s selection of a family is not a legal or in any way binding agreement or contract. At this stage, expectant parents are exploring their options; beginning the process of working out how a placement might happen, who their child might be placed with, what they want their adoption to look like — closed or open, pictures, letters, visits, updates — all while navigating whatever is going on in their lives to make them consider an adoption plan for their child. Their pregnancy may have been unplanned and they may be experiencing additional traumas in their lives including divorce, domestic violence, illness, death of a partner, death or illness of another child, etc. Women considering placing the child they are carrying are experiencing a crisis pregnancy, and are vulnerable. Ethical adoption practices need to focus on how to best protect them and their needs, and not on the desires of potential adoptive parents.

There is an unspoken expectation that after the pregnant mom is “matched,” the adoption must happen. We are already experiencing the trauma associated with an unplanned pregnancy, so we are easy prey to be exploited, shamed, and guilted. By putting that “perfect” waiting couple on [a] congratulations blast, we can feel our future is already written—don’t disappoint another person. - Lisa F

The Problematic History of Matching in Adoption

Matching is rooted in racism and bias with the goal of erasing the placed child’s birth family. According to the Adoption History Project at the University of Oregon, “under the matching paradigm, one family was substituted for another so carefully, systematically, and completely that the old family was replaced, rendered invisible and unnecessary.”

This practice really only became common in the 20th century whereas in the 19th century, children tended to remain in contact with their biological families, even when placed permanently for adoption (excepting the “orphan trains” pioneered by Charles Brace who also preferred to place children from Catholic families with midwestern, Protestant, farm families).

Matching required that adoptive parents be married heterosexual couples who looked, felt, and behaved as if they had, by themselves, conceived other people’s children. What this meant in practice was that physical resemblance, intellectual similarity, and racial and religious continuity between parents and children were preferred goals in adoptive families. Matching was the technique that could inject naturalness and realness into a family form stigmatized as artificial and less real than the “real thing.” Matching stood for safety and security. Difference spelled trouble. Source

On June 9, 2022, Governor JB Pritzker of Illinois signed into law SB3120 expanding child bereavement leave for families. This amendment specifically includes expanded leave for “a failed adoption match or an adoption that is not finalized because it is contested.”

The term “failed adoption” is an adoption where the child remains, in most cases, with their biological family.  At what point did our society decide that a child remaining with their biological family is a failure? At what point is a woman choosing to parent her own child considered contesting another family’s desire for that child? Public matching announcements create undue pressure on expectant mothers, making it harder for them to make informed decisions about their child’s future.

The practice of adoption matching is coercive and unethical as it places an unfair burden and expectation on the expectant parent to carry out the placement plan and has the potential to make them feel pressured to place rather than make a choice to parent or select another family. Birthparents choose the potential parents for their child before knowing very much about the potential adoptive parents beyond media designed to present them in the best possible light: a dossier, a glossy adoption book, and then, potentially, a brief meeting. Adoption is a lifetime commitment. It takes time and information to make a truly informed decision.

We queried a number of birthparents on the topic of matching.  While most felt that matching is coercive and unethical, some indicated that they appreciated being able to select a family and get to know them prior to their child’s birth. In those cases, they also reported that they felt supported by their agency and felt that they could change their mind. Still, even those birthparents who felt it was a positive experience for them acknowledged the issues with the practice:

I don't like the matches being announced pre-birth. I think this leads to more feelings of indebtedness for the expectant mother. I think she needs to be reminded throughout the process that she can change her mind at any time and feel completely free to do so. In my personal experience the pre-birth matching was important to me and is what led me to my decision because of the time I had to get to know my son’s parents and build a bond and trust. I also think it is very important to discuss expectations around openness ahead of time. I never felt pressured by my son’s APs or the agency to move forward with the adoption and knew I could change my mind, yet I'm sure I would have felt guilty doing so. I do see how this can lead to coercion so it needs to be handled carefully with guidance from an ethical, unbiased professional and left up to the expectant parent to take the lead, not the agency [or prospective adoptive family].  -Jessica F

Most birthparents, however, cited feelings of indebtedness towards the prospective adoptive family with some expressing that they consider it to be just one more way for agencies to exploit vulnerable individuals who are in crisis:

It took me many years to realize that although my son's APs did not intentionally do anything manipulative, the agency did. And one of those things was the immense pressure placed on me to "build a family" by destroying my own. -Catherine

As well, frustration was expressed over the general lack of transparency throughout the process — from the fees being paid by prospective adoptive families to the rights of expectant parents and the laws protecting them — leaving expectant parents and birthparents feeling powerless and traumatized.

They never give us the real facts or statistics, which is yet another form of coercion and manipulation. Whatever it takes to get us to relinquish. - Carissa Losey

Matching and the Power Dynamic in Adoption

Candace Cahill, author of the upcoming memoir, “Goodbye Again,” placed her son for adoption 30 years ago. She says that she was swayed towards choosing adoption when the counselor told her that she could select her child’s family. Reflecting on her experience, even though she did not meet the family prior to placement, and they were not told that she had selected them, she feels that the practice is unethical:

While at the time (30 years ago) I felt a sense of relief once I’d chosen the APs, I can now clearly see how being encouraged to do so prior to delivery of my son was coercive and unethical. It should not be allowed, or if it is, it should be standard practice that there be no interaction between the expectant parents and the APs until after delivery, with a minimum waiting period.

Expectant parents are led to believe that by selecting their child’s adoptive family, they have some control over a situation that is largely outside of their control. They are encouraged by agencies to define what they envision their relationship will be with their child and the adoptive family. What is rarely explained to expectant parents is that those agreements are unenforceable. Adoptive families may honor the agreement for a handful of years, but in the vast majority of cases, open adoption agreements are violated by the time the adopted child is 5 years old. And when these agreements are violated, it doesn’t just let down the birthparent(s), it lets down the adoptee, as well.

Candace’s argument that expectant and adoptive families should not interact, while eliminating the ability for families to get to know each other prior to the child’s birth, protects the expectant parent from unethical and coercive practices, as well as protecting the prospective adoptive family from the disappointment of a placement that does not happen. It further eliminates the pressure that an expectant parent feels to follow through with the placement even when they have second thoughts about the family they selected or are considering parenting.

At its core, matching announcements give prospective adoptive parents a feeling of ownership over a baby being carried by another woman. Publicly, her baby is now their baby. While we understand that adoptive parents may like the announcements because they are excited about the prospect of becoming parents, it’s important that they understand how coercive and pressuring that can feel to an expectant mother. Parenting is a lifetime commitment, and parenting an adoptive child means committing, in some form, to your child’s birthparent(s). Building a healthy relationship with her informs what the relationship with your child will look like over their lifetime, and a healthy relationship can’t come out of a situation where a woman, exploring her options during a crisis pregnancy, feels coerced by the process.

I felt like I had to choose a family immediately to know my baby would be going to a safe family and for my head to calm down. Like I couldn't be 'at peace' until I had chosen where she would go. I understand that that is bad, and after that I felt pressured by them and their expectations to place my child. - CF

It is critical, both during and after the adoption process, that adoptive parents examine adoption practices with a critical eye, prioritizing the needs of vulnerable birthparents and adoptees, to ensure that their adoption is as ethical as possible. It is equally important for potential adoptive parents to understand that they have a say in their adoption, and they can request that their agency not post a public matching statement, as a way of protecting the expectant parent, giving her the space and time necessary to make choices and decisions without pressure, coercion, or fear.