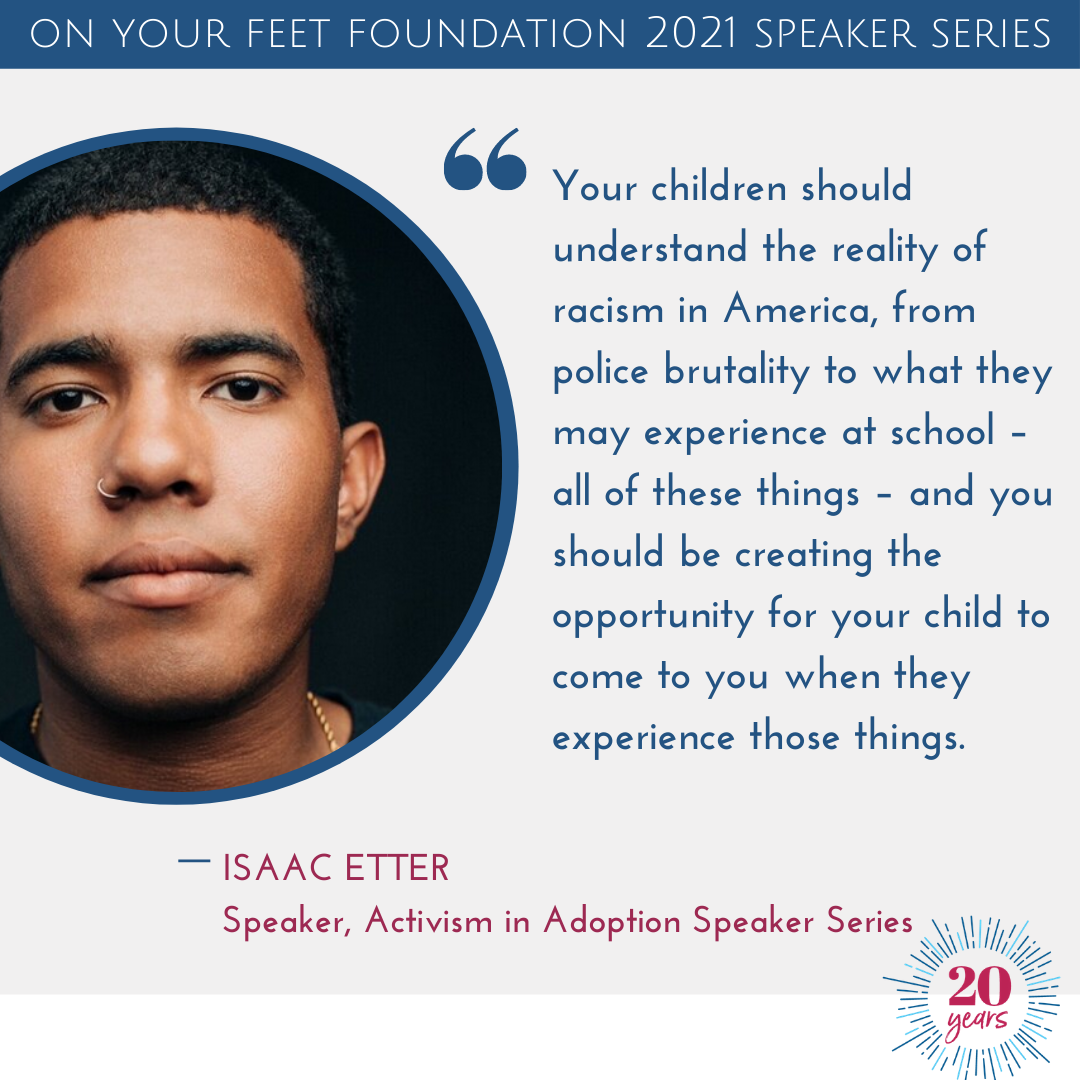 I loved this session so much. I think all three of them demonstrated varied life experiences but with common threads. They took social risks to be more intentional with their own journey. They have taken hurt and used it to grow--and show others how to grow. They serve as role models. They are so reflective and able to articulate a sense of self and journey in such inspiring and relatable ways.

Last weekend, we had the honor of hosting Isaac Etter as our Activism in Adoption speaker. Joined by moderator Shanyce Henley and panelist Nam Holtz, Isaac took a deep-dive into the intersection of race and adoption, providing an audience of adult adoptees, adoptive parents, and adoption professionals an unvarnished look at some of the challenges inherent in building a multi-racial family. The Activism in Adoption talks are safe spaces for both audience and speakers; a place in which the adoption community can come together, hear perspectives that differ from their own lived experiences, and ask questions they might not otherwise have a place to ask.

There were a lot of powerful moments shared, not just from our speaker, but from our moderator and panelist. In the adoption community, while it is true that more and more people are beginning to unpack what it means for white adoptive parents to parent a Black child, nobody is talking about what it means for a Black mom to place a child with those white parents.  As our moderator Shanyce spoke about her own experiences of being a Black mother and placing with a white family, it was abundantly clear that this was the first time many of our attendees had heard transracial adoption told from her point of view. We are also so grateful to Nam for joining as a panelist, because so often the adoption narrative around transracial adoption is centered in white parents with Black children, leaving out international adoptees from at least a dozen countries, Native American adopted children, and every adoptee who doesn’t share a race or ethnicity with their adopted family, and their stories are crucial for every member of the adoption triad to hear. We will be screening Nam's critically-acclaimed, award-winning documentary, Found in Korea, in April as part of this speaker series.

Below are some of the transracial adoption resources Isaac touched upon in his talk. He was kind enough to curate this for us and let us pass it along to anyone in the adoption community who could benefit. Our next session is March 21st, and our speaker is Billy Kaplan, LCSW, who will be unpacking trauma, a topic that couldn’t be more relevant both in the adoption community, and outside of it, as we all come to terms with the lasting effects of Covid on our lives and families.

Ibram X. Kendi – How to raise kids to be anti-racist and talk to them about racism

The Color of Compromise: The Truth about the American Church’s Complicity in Racism, by Jemar Tisby

30 books to help you talk to your kids about racism

How To Be An Anti-Racist by Ibram X. Kendi (Also Instagram)

The Color of Law by Richard Rothstein

This Book Is Anti-Racist by Tiffany M. Jewell (also Instagram)