Q & A with Upcoming Activism in Adoption Speaker Cordan James 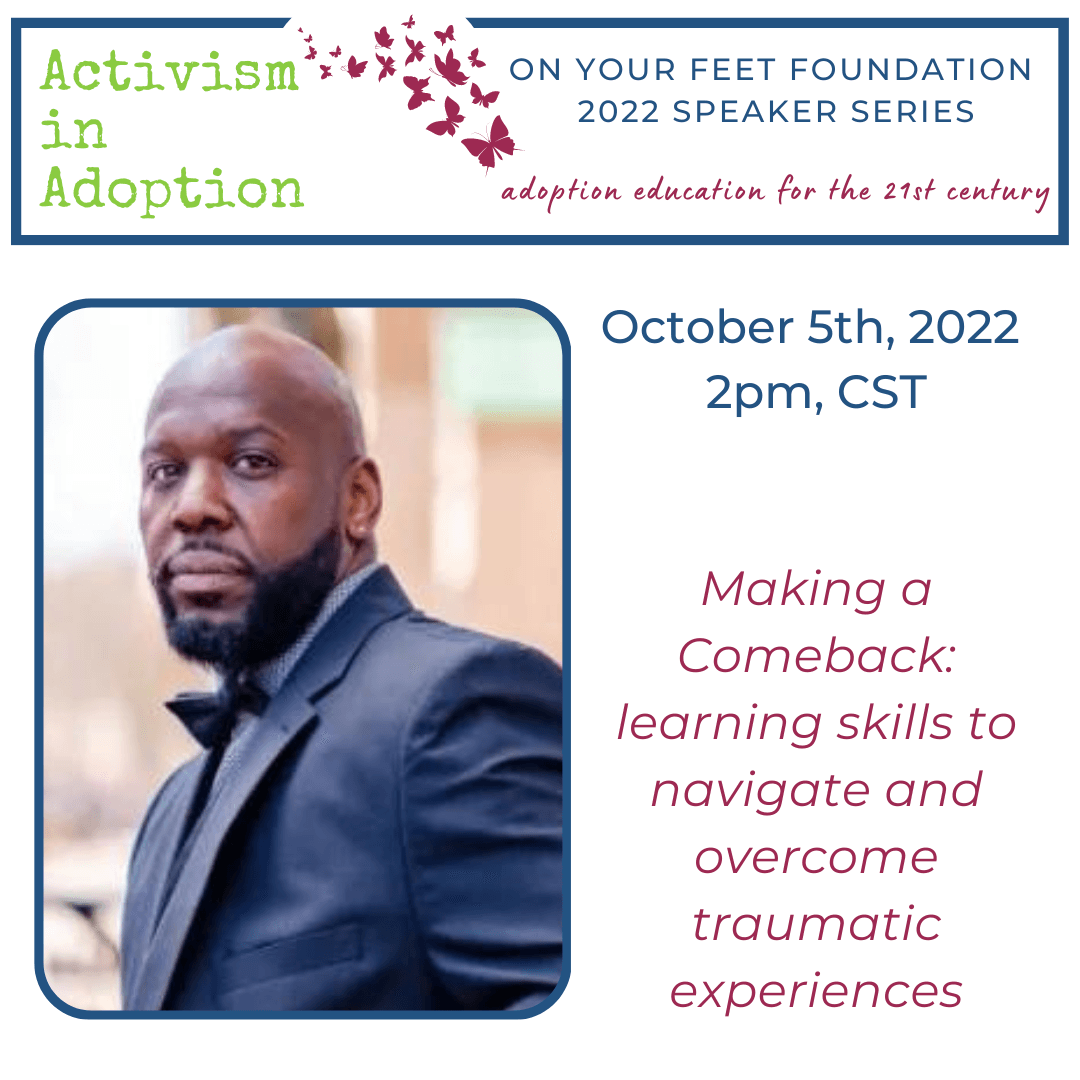 Drawing on his experiences as a former foster care kid, an adoptee, and a father, Cordan brings his unique perspective to his work, and we are very grateful that he agreed to join us as an Activism in Adoption speaker. We had the opportunity to sit down with him to unpack his mission, talk about fathering, and discuss the intersection of race and adoption.

How do transracially adopted people develop a sense of identity, or racial identity, growing up in a white household? What can parents do to support that development?

The best way to approach the topic, I think, is to sit down with your child and ask them, what are you feeling about this? I don't think I would start that conversation. I think I would probably let my child educate me on what they're feeling, and where those feelings stem from, and what kind of things are important to them, and just handle it on a level that it's important to them. There’s a lot there is a lot of misinformation out there, and we can go read articles and see the stuff that's going on, but what's directly affecting your child is what's going to matter the most.

Tell us more about The Comback Kids Mentorship Program. What is that about?

The Comeback kids Mentorship Program is a  twice weekly, nine week course based on the WhyTry program, which consists of ten visual metaphors that reinforce resilience. In the first lesson, we talk about the ups and downs of life – reality. And as the program progresses, we talk about defense mechanisms, labels, how to choose the labels you want to keep with yourself, plugging in to your support system, overcoming obstacles, and creating motivation. And all of this is reinforced with videos, music, and activities that further drive home the lessons.

Once they're done with the nine weeks, they become the Comeback King or Queen, and they become peer mentors for the next cohort, and that next cohort inspires them as well.

Who are your attendees?

I don’t have any stipulations on who gets to go. Typically, this program partners with probation officers, parole officers, and school resource staff to identify need.

I have adopted a park. I have a huge park that I can do capital improvements on, whether it's mowing the yard, picking up trash, planting flowers, mulching, scrubbing these huge statues that are there. Kids can do their community service hours there if need be, as part of one big mentorship program. This is a program that I personally took when I was thirteen through eighteen, going through behavioral training facilities. I am able to say through personal experience, here's what the program will do, and here’s your call to action.

You are also mentoring fathers. Tell us about Fathering Together.

Fathering Together is a core team of five, and we are taking on equity from a patriarchal perspective, where we realize where our strengths have come from, and that they lie on false foundations, and that we love our wives, we love our daughters, we love our sons, and we want the world to be a better place for them, as well as for us. We do advocacy work, and facilitate dad chats, which include everything  - fatherhood and motherhood – and we really get in to it.

The adoption triad is often referred to as birthmother, adoptive mother, and adoptee. Too often, fathers are invisible in this space. Why do you think that is?

I think there are systemic factors that reinforce mothers mothering, and fathers going out to work to be providers. And that’s great, to be a provider, and it’s very necessary, but [in doing so] you sacrifice ever being a father. Men end up being providers, and disciplinarians, but we are much more than those things. It’s crucial that we are also home with our children.

What do we need to change, to put fathers back in the triad? How can we make it a more welcoming space for them?

Not to sound too simplistic, but I think the desire should be there to want fathers being more involved: a desire from my partner for me to be involved in my child’s life, but also in the workplace, a desire for dads to be able to say, hey, I’m not going to make this meeting today because it’s my son’s baseball game, and not to feel ostracized or sissified for wanting to do things like that. In my own life, when I said I had to take my daughter to school on Mondays, I’d explain it by saying, well, it’s because I’ve got to be a father, and a lot of men would say, I really admire how great of a father you are, but I still need you to come to work. And I agree, I still need to come to work, but I also still have to be there for those moments [with my kids], just as much. You know it can't just be, well, can’t her mom do it? Well, why can't I do it? Why does their mom need to do it?

I like what you guys are currently doing, by inviting them to be at the table. That’s the equity part, making sure everybody is at the table. When men feel comfortable that women are saying come to this table, we want to hear you, we want you at this table, that's an inviting space for men. I think that oftentimes men?  We feel very alone. When it comes to just dealing with things, we do it by ourselves.

Two years ago I did a survey and I asked men how many of you would reach out to someone in a crisis, and 87% of men said they would not. What happens to men is, in that moment when we say we are going through something, for some reason, it’s joked about. It’s not received the same way it is telling a woman. That definitely has to change within this. It’s important for men to realize that they can be at the table and say these things, and as they learn that, learn to stand in that.

You are a dad. How did you becoming a father a change you?

I became a father four months after graduating. Four months after aging out of foster care. So becoming a father? I've had to grow into that. I was 18 years old. I grew up with my kids. I had all [my] successes and made all the mistakes with them right by my side. I think I've had to learn amidst my caution for trauma and causing trauma. I've had a very high awareness for how my actions might affect my children, and stayed transparent with them.

I’m not sure a lot of people realize this, but what happens to kids in the foster system after the age of 18?

I paid for my own apartment. I paid for everything, and got myself a job. I don’t recall any services or help available. And it’s tough, not having the support, not just financially, but having a place to go to work through things. I think that’s probably the one thing we miss, coming out of foster care, is the support.

To learn more about Cordan, visit his web site, or find him on Facebook or Instagram. He will be speaking live at Activism in Adoption on October 5th - his talk is free, but we do require attendees to register in advance.