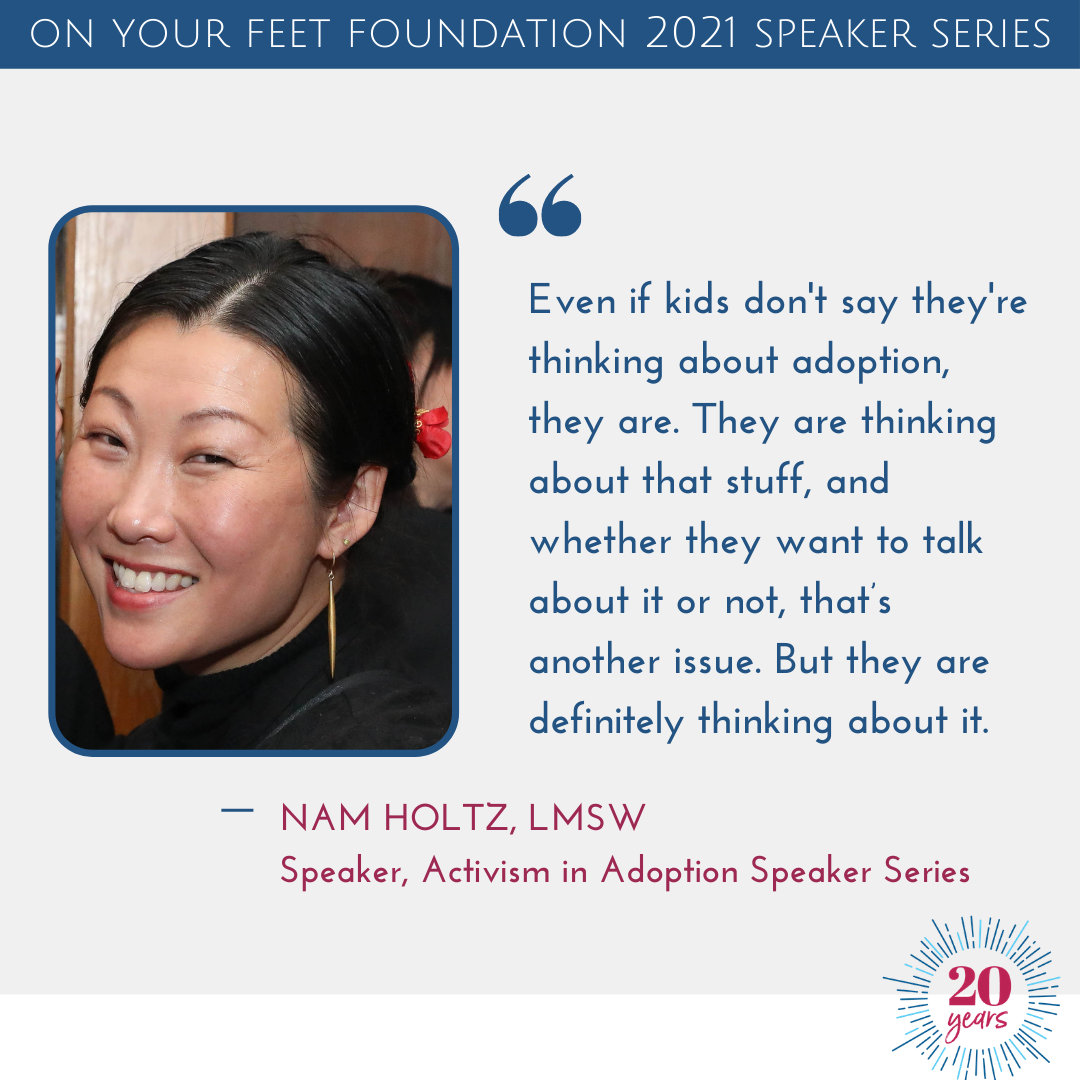 On Sunday, April 18th, we are honored to welcome Meggin (Nam) Holtz, LMSW as our Activism in Adoption Speaker.  A Korean adoptee, Nam has been involved in adoption advocacy, awareness, and support for a decade. Her award-winning documentary film, "Found in Korea," about birth search, identity, and adoption was created to serve as a catalyst for conversations about adoption thoughts among youth and adults alike. She served as the Teen Mentor facilitator at "All Together Now," a support group for adoptees and their families, wrote, Who Cut My Umbilical Cord? published in "Flip the Script - an Adoptee Anthology," and holds an MSW with a focus in Child and Adolescent Trauma in the clinical setting. Included in the ticket price is the opportunity to screen her film prior to her talk.

The international adoption programs we know today have their roots in Korea adoption. Harry Holt, whose 1950’s South Korea adoption program became the basis for what we know today as Holt International Children’s Services, started the international adoption movement, which has seen more than 275,000 children from more than twenty different countries adopted into the United States. Because of the age of the Korean program, the international adoption community has had the unprecedented opportunity to learn from the experiences of Korean adoptees from infancy through to adult life, giving us a fuller understanding of the transracial, transnational adoption experience at each life stage. The importance of hearing the voices, narratives, and expertise of these adoptees cannot be overstated. What we learn from them now can help every subsequent generation of international and/or transracial adoptees, making films like this one so important for everyone connected to adoption to watch.

Nam sat down with us this week to talk a little bit about her film, giving us some insight on what it was like to travel back to Korea as an adult adoptee in search of her family.

What led you to make a film about your experiences, traveling back to Korea?

That is a great question. My earliest desire to go back happened because I helped my sister to give birth. I helped her through labor and saw my niece born. And I really started thinking about the circumstances surrounding my own birth. I wondered who was there, who wasn't there, and where was I.  I wrote a poem called Who Caught My Umbilical Cord that was published in "Flip The Script: An Adult Adoptee Anthology" – that was the catalyst. And I started thinking about it because I hadn't been interested in going back and doing a birth search before, but the human experience of seeing another human being born really connected me to my beginnings, and I was like okay I'm curious. I'm quite curious.

So that was really the first inkling that I wanted to go back. I was also in an acting class and my acting teacher was investigating a lot of those deep adoption emotions with me.  I think that was really the beginning, and then I just decided to go for it.

Did anything surprise you about your experience in Korea?

So many things surprised me. The first and probably the one of the most chuckle-inducing is that the bathrooms were so clean. The public bathrooms were spotless. It was really part of the national pride. They felt that part of the face of their country was their public bathrooms, so they were just sparkling clean and well-stocked. And they hung pictures of the employees who cleaned them on the wall. I mean I was really shocked, because you know the state of public restrooms in America, it couldn't be more opposite. Of course, you know, it seems like such a really small thing but it was huge.

Another thing that really surprised me was just … everyone was so nice! Everyone was so nice to me, you know, and I didn't know how they would be. I had a little bit of nervousness, knowing the stigmatization against adoptees, so I was really nervous, but they were so nice! And you see that, in my movie.

Looking back, is there anything you wish you had done differently while you were there?

Yes! I would have given myself a couple days off, because I just worked the entire time that I was there, because I was making the film. It’s tricky, too, because some magical things happened when the cameras were off. That kind of a trip? It would be really hard to take time off, to just relax.  But I do wish that I had just slotted in some free time and been very strict about it:  this little segment of time is going to be no camera, or just my time, to give myself time to get lost, because that's how I like to travel. I would have liked more leisure time, without the camera.

Have you been back since you made the film?

What was the hardest part about making this movie, and what was the most rewarding?

Aside from the emotional challenges? There were some scenes that I actually felt quite sick, as I was editing them. Aside from that, the actual producing of a documentary was something that I had to learn step by step-by-step. That was a huge learning curve, and it was a very challenging. I had to wear just about every single hat there is to wear in making a film, and teach myself as I went along.

If I had known what I was getting myself into, I might not have done it. There were other challenges, too. I started with one editor, and worked with one editor for a year, and then I shelved it because it wasn't going in the direction that I was wanting, and that's an unknown fact about the film. It wasn't the fault of anyone, it was just that I needed and wanted a different flavor and tone, and I could see as much as work we as we've put into it, it just wasn't right. So I had to put it aside for a little bit and then come back to it. So that's why it took me almost 10 years. It took me nine years to make this film.

Nine years, from the point of starting to fundraise for it, which was another huge endeavor! I hate fundraising – hate it! – but I had to do it. It's part of making a film. And I didn't know how expensive it was going to be so I had to do two, and I also put in a lot of my own funding, you know, when I was waiting tables, so you can you can imagine the heart that's gone into this film. That was definitely one of the hardest things, just keeping on going for nine years. It was like a nine year labor and I think also emotionally knowing that the goal for me was to share it, and ultimately support others. It felt like I had a little bit of responsibility, since I have started, so that it was hard to stop and it was hard to keep going, it was just hard. It was not an easy process. Let's just put it that way.

Who is the audience for your film? Is it too adult for kids to watch?

I think I made it with kids in mind. There are subtitles,  so you need to be able to read, to fully get it. But I've had kids as young as five watch, and they get what they get from it, and they enjoy it. It's cool to have conversations with those five-year-olds afterwards and say, what did you think about it, and they thought a lot. It's really amazing.

I think it's most beneficial to have families watch, for everybody. It will be available to the parents for an entire week before my talk, so if they want to watch it first, they can screen it before showing it to their kids. Even if kids don't say they're thinking about adoption, they are. They are thinking about that stuff, and whether they want to talk about it or not, that’s another issue. But they are definitely thinking about it.

Next week, we will have part II of our interview with Nam, to get her suggestions and advice to white adoptive parents about how to best support a child adopted transracially and/or transnationally. Tickets are on sale now, and ticket holders are able to screen the movie online starting on April 8th, before attending Nam’s talk on April 18th.