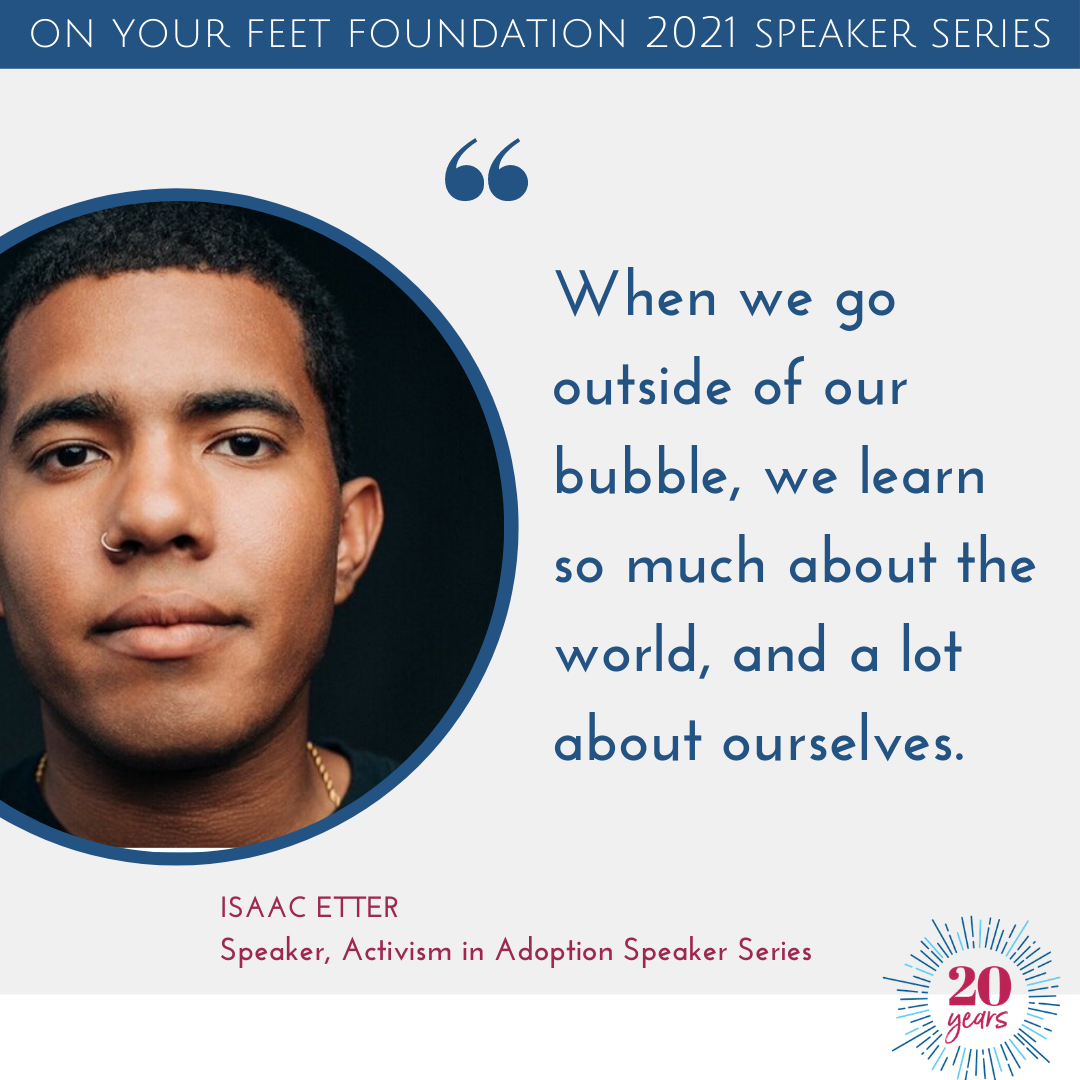 We are honored to welcome Isaac Etter as our February Activism in Adoption speaker. Transracial adoptee Isaac Etter is an activist and social entrepreneur, and the founder of Etter Consulting, whose mission is to provide trainings and services for adoption agencies that help prepare foster and adoptive parents for transracial adoption and fostering so that children are going into educated and inclusive homes. He agreed to sit down with us last week to do a Five Questions interview, and his answers were so good we didn’t want to cut a thing, so we we broke his interview up into two posts. Part One is here.

You co-founded an education and advocacy organization, SafeHouse Lancaster, where you are also the co-executive director. SafeHouse Lancaster educates and equips Black and Brown kids to become activists - what can white parents do if they want to encourage their non-white kids to do that - to grow into their activism, and to have that sort of power within themselves?

I think it has a big deal with how you talk about difference throughout upbringing.  I think the more that we build compassion around difference, the more we are encouraging people to fight for other people. Instead of this wall between me and you, it’s you're a human and I'm a human, and I think that just builds a general characteristic of activism. And I think activism looks so many different ways, and that's one of the reasons I love SafeHouse - because we're not necessarily encouraging young people to drop all of their jobs and spend day and night on the street, but we're really being proactive about what does it mean for you to be an activist; as a lawyer, as a nurse, what does it mean for you to just have this this framework where you are saying,  I'm valuing other peoples’ experience in life equal to mine and I'm going to stand up for marginalized people within my field and demographic.

I think parents can reflect those same characteristics and I think they can also encourage their kids when they do get to a point of finding their own identity. For me, when I started doing my activism work, it wasn't received very well and that rift between me and my family, me and my community, that I grew up with, has been very hard to come back from.  It took years to come back from. I can only imagine the difference it would be if I grew up in a community that listened and valued other experiences more, rather than immediately judging and saying, oh we don't talk about racism; oh police brutality, we're not going to talk [about it]. That quick snap really closes in and creates walls between people, and I think activism can be as simple as literally choosing to value other people as yourself and their experiences.

When we go outside of our bubble, we learn so much about the world and a lot about ourselves, and I think that since it's convenient for non-adopting people in general to not really do that, it should be more of a priority especially for people that are adopting, and for them to make an effort for it to be within the race of their child. If you're adopting an Asian child, not that you shouldn't care about Black Lives Matter, but you would hope that you would spend some time maybe going to more Asian restaurants, or seeing what kind of recipes you can make from the Asian market, and just building relationships within those communities that actually reflect your child and also give you this experience of learning about something new and reflecting on cultural things.

When you are presenting, are there any questions that no one ever asks you about transracial adoption, that you wish they would?

I enjoy parents being really honest about their own biases in our sessions.  I've had families very honestly ask me if durags were related to gangs, or if they raised their black kid on a farm would they feel like a black person. These are just very honest questions that I really enjoy.  I really value parents and families that come asking the really hard questions that are sincere and honest. They’re not [asking] to cause a commotion -  they’re not trying to be problematic -  they're genuinely living with this framework, and they're trying to understand life outside of it. I am always inviting the toughest questions. I'm always welcoming more vulnerability in the questions.

I've had some really beautiful sessions where people were crying. I really love that people are bringing their full selves to the sessions, because I feel like my training is meant for that, especially the one that I'm doing for this talk. This one is really meant to kind of pull on that bias in yourself. I think a lot of people listen to me talk and they see themselves in my parents, because I talk about how I don't think my parents are racist, but I think that their biases really influenced how they see me, and I think a lot of people see themselves in that. I think it draws out a really good conversation.

The way that families [will] get the most out of this [talk] is when they bring their authentic, full selves to this conversation around adoption and bias, because adoption isn't just a kind of checklist, you know what I mean? Like, I have black friends now, I've gone through cultural events.  It’s a very personal journey of always learning and continued learning, and understanding that you might be very outspoken about racial justice and your child might not be, but that doesn't mean that you shouldn't be outspoken about racial justice. I think in preparation for coming to this session, bringing those vulnerabilities and bringing your questions is really important.

Tickets are now available for Isaac’s talk on February 21st. For potential adoptive parents, adoption education credits are available. All proceeds from our Speaker Series go toward supporting our programming for birth parents.