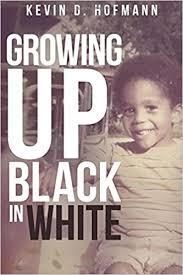 Kevin Hofmann is an author, public speaker, and diversity and inclusion trainer. His book, Growing Up Black in White chronicles his childhood as a transracial adoptee, and offers a roadmap to white parents raising Black children. Kevin is joining us this Sunday as a panelist for Dr. Beverly Daniel Tatum's talk this Sunday at our Activism in Adoption Speaker Series. Tickets are still available, and all of the talks are recorded and available to ticketholders. This week we had the chance to talk to him about his book, and his work as a diversity expert.

What prompted you to write the book, and who was your target audience?

The initial thought was, “boy what an unusual way to grow up -  not everyone gets to experience the world from this viewpoint.”  What I realize now that I didn't at the time writing it was, as an adoptee and as in a person of color, I simply just wanted someone to hear my experience. I wanted to write honestly about race in a way that your average white person wouldn't get so frustrated that they would put it down and walk away. The idea was, how about you tell all these stories about you and your best friend, and the craziness that you got into, but then also filter in so how did you respond to that incident as a person of color in this country - how what did that look like to you what it feels like - so the book was really to give a road map to adoptive families that came after us and then also I just wanted people to hear my experience as a person of color .

I wrote it thinking I was writing to transracial moms. Someone had told me when you are writing a book, picture who you're writing to.  I was writing to people that I wanted to help out in a way that my parents didn't get help - that's initially who I wrote it to - but then when I stepped away from it, like I said, I was very purposeful about writing about race, and it took me 10 years after I wrote the book to understand that this could actually have a larger impact - a larger community could be impacted by this book - and so now it's the book that I used to talk to a larger audience about diversity and inclusion.

In the book, you say, “silence is security,” when telling a story about how your father’s job as a Pastor was in jeopardy after your adoption. Do you think this still holds true today?

I think my parents were taught when they adopted me to just go back home and act like nothing happened. Don't tell him he's adopted. For a child transracially adopted we always know  - children know racial differences as early as six months old – and it’s maddening for children when we're seeing the elephant in the room that no one's talking about, and a lot of times as a person of color you walk away saying,  OK racism isn’t to be talked about, and what I'm getting is that I'm less than everybody else and no one wants to address all that comes with race and so we shouldn't talk about it. I should just internalize that, and so many racial incidents that happened because we didn't talk about it. I walked away thinking I'm the broken one and that's why people are coming at me kind of left of center - it's because I'm doing something wrong or I'm not worthy -  and as an adoptee you have these issues with relationships from the jump because your initial relationship was shattered. Adoption does a great job of supporting those voices that you're hearing in your head that say you're not worthy, and then on top of being transracially adopted,  society does an excellent job with telling people of color we’re not worthy,  so you keep getting these hidden messages in the silence.  It's security for the parents, but then you've left it up to the child to figure it out. Honestly, I remember growing up and being so starved for someone to mention the elephant in the room, and I just wanted someone to start the conversation. I think my parents made the mistake of saying to themselves,” when Kevin's ready he'll come and talk to us about these deep issues around adoption and race.” My wife and I talked about that and she pointed out that children shouldn't have that job - it shouldn't be their job to bring up the complexities of adoption and race.

How can transracial adoptees get a sense of their racial identity when their parents are white?

So what my parents did for me is that we moved from an all-white community that didn't want us there because I was part of the family. My father chose to take a church in Detroit and the parish that he was responsible for was 50% white 50% Black,  but the house we lived in was in a Black neighborhood and so from age 3 to 18 I was always around people that look like me and so I learned about Black culture through those that were living it.  I never had those thoughts that a lot of transracial adoptees have which is man I wish I was white or man I wish my skin wasn't Brown. One of the biggest concerns the Black community has with transracial adoption is that white people are going to raise these kids who aren't confident children of color or know who they are or don't have a positive racial identity.

What advice would you give white parents that can't move - how can they help develop racial identity in their kids if they can't move to a place where their kids can live in a Black neighborhood?

That means your windshield time has to increase.  I'm not telling you to move you if you live in a white community, but you drive across town to put your child in a sports League, a dance troupe, an acting group, whatever, in a community that reflects your child.  That way you do two things: you put your child in contact with kids like them, and it also expands the parents’ community, so that now you have the chance to meet adult mentors. We need to do a better job of giving transracial adoptive parents mentors, so that they can go to their adult friends who are raising children of color. It’s just so helpful to have someone who understands life from your experience.

There are a lot of hopeful white adoptive parents out there who expect they'll probably be adopting transracially. What advice would give them? What should they be doing now to prepare?

Start having honest and upfront conversation with family and extended family. I think transracial families in preparation for adopting need to have some very frank conversations with family. We all know who the uncle Billy is in our family that's going to say the horrible racist joke at the 4th of July picnic. You need to have a very frank conversation with uncle Billy so that doesn't happen around your child, and then I also encourage families to pay attention to that when your child is around that person, and have conversations with your child about that relationship.

In your book you give this advice to white parents: “Your circle should go through a tanning process.” What does that mean?

You should be bringing in people of color into your community, because what you don't want is - and I ask this question when I do training with transracial parents - what do you think your child would say about who's welcomed around your dinner table? If your child has never seen a person like them sitting at your dinner table, what do you think they walk away from that experience thinking, especially if you know that as children they develop through their experiences? When children are younger, they are egocentric thinkers - they think and they process things how they experience things, so a young child who's never seen a black doctor may say something like, well black people can't be doctors because I've never experienced that. If they grow up and there has never been a person of color welcome at their dinner table what do you think their takeaway is from that? I think a lot of kids would walk away from that thinking people like me are not even welcome at my own dinner table. I think it’s important that you very proactively create a way where your community does tan - it should start to color up. I think what transracial parents don't understand is, they need to go into it understanding that yes, your community is going to change, your interests are going to be totally different, you will view race now in a way that you never had, and if you always surround yourself by people who think and look like you do, and now you're experiencing something that a lot of your friends aren't, they are going to have a hard time wrapping their heads around why you're so hell bent about race,  because now it impacts you every day, and so it means your communities are going to change - your friendship group is going to change - because you're looking for those that can support you.